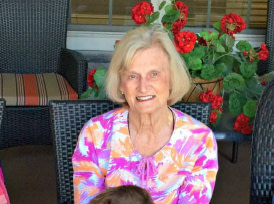 Barbara Burgess was born on January 11, 1936. She was born in Gadsden, AL but grew up in Lookout Valley, TN. Barbara met Sam Burgess and married him in 1957. She has two children, 7 grandchildren, and 2 great- granddaughters. Barbara worked all her life. Her first job was at a dime store but she held several other jobs after that, all secretarial positions. She even passed the Certified Professional Secretary exam, the registered service mark for the recognized rating of secretarial proficiency. She has worked for Double Cola, she was a secretary for the school system special education program and eventually retired from EPB. While working for Double Cola, she even did some modeling for the company, using her photographs for advertisement. Some of Barbara’s hobbies include swimming, sewing, hiking and visiting the beach. She and her husband learned to square dance and had loads of fun. One year they even traveled to New York with other dancers. Barbara will tell you that years ago, she would have had a long list of things that she has always wanted to do but now can only think of one. She has always wanted to visit the White House. Some of her favorite memories include the birth of her two children, when she became a Christian and when her Sam told her that he really loved her. Barbara enjoys being with her friends, she always likes a good movie and loves her dog, Toby.