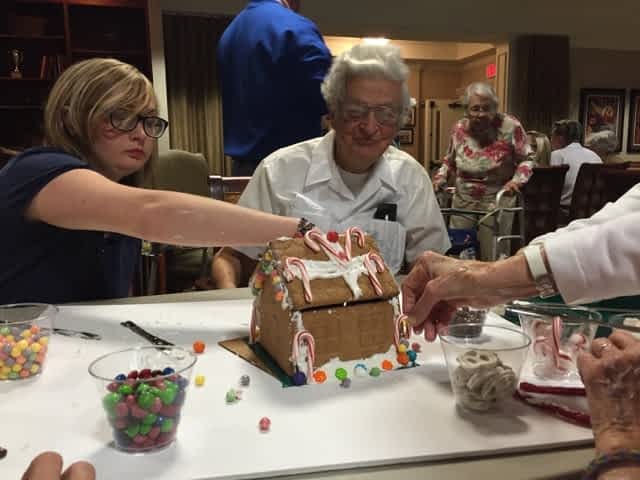 HIXSON, Tenn. (December 7, 2016) – Morning Pointe of Hixson residents welcomed Skyuka Hall students to enjoy a holiday craft together. But while sticky fingers tacked gumdrops on gingerbread rooftops, a strong foundation of friendship was being built.

Every week, the seniors at the assisted living and memory care community exchange hugs and conversation with the students from the K-9 school that serves students with learning differences. Although they are generations apart, the two groups met a mutual need in one another through Morning Pointe’s intergenerational programming.

The partnership between the organizations began in early fall. While driving past the community, Dr. Josh Yother, Head of School, felt called to connect with the residents. Dr. Yother then met with Morning Pointe Executive Director Teresa Bryant, and a new relationship began.

Since the visits began, the senior living associates and the faculty at the school have witnessed an “opening up” of the students.

“It’s something that I knew, that I needed to reach out to them,” Dr. Yother says. “It was predestined for something that goes past anything we had ever imagined for these kids.”

Kristin Hunt, Skyuka Hall advocate and volunteer, says the change she has seen in the students has been overwhelming, including for her 12-year-old son who is a student at the school. Hunt says the Morning Pointe became a safe space where both populations are not judged.

“They don’t see age in each other. They see joy in the interaction,” she says. “These relationships are special to these kids.”

Betty Rogers, Morning Pointe of Hixson resident, puts the finishing touches on the roof of her gingerbread house.

Having caregiving experience in the senior care industry, Hunt says there are more similarities between the students and Morning Pointe seniors than many may realize.

“Just like the seniors have a care plan, the students have an individualized education plan,” she says. “It did not take me long to realize they are one and the same.”

During the first visit, Campbell Jannerbo, 14, a ninth-grade student who experiences disengagement and social insecurities, kindly offered his chair to a resident and found the courage to speak. The faculty and senior living associates who witnessed the interaction were moved to tears.

“I don’t know how he connected, but he found a depth with these residents,” said Penny Jannerbo, Campbell’s mother. “When I picked him up that day, he told me that he wanted to volunteer.”

Penny says the partnership between Morning Pointe and Skuyka Hall has given her son confidence, stating that the experience has brought compassion and positivity into his life.

“It’s delightful and amazing that he had the opportunity to connect and form a bond,” she says. “He recognizes the value in these seniors and that he can learn from them.”

LeCroix says this partnership brings back memories of the children he met during his wife’s years as a teacher. He says the students have found a special place in his heart, and that there are few differences between the seniors’ and students’ needs.

“I think everybody wants to be loved,” LeCroix says. “That’s universal and I think that’s part of it.”

After each weekly trip, the students express their enjoyment and look forward to returning to Morning Pointe in their spare time. Dr. Yother says the experience is a testimony of the needs found within every individual, stating that the relationship embodies his school’s mission to develop students academically, physically, socially and spiritually.

Morning Pointe’s five senior living communities in the Chattanooga area embrace intergenerational programming, as participants young and old engage in meaningful activities where they learn from one another. Dr. Yother says these programs serve as a solid model for other schools who aim to develop students outside of the textbook.

Click here to learn more about intergenerational programming at Morning Pointe of Hixson.